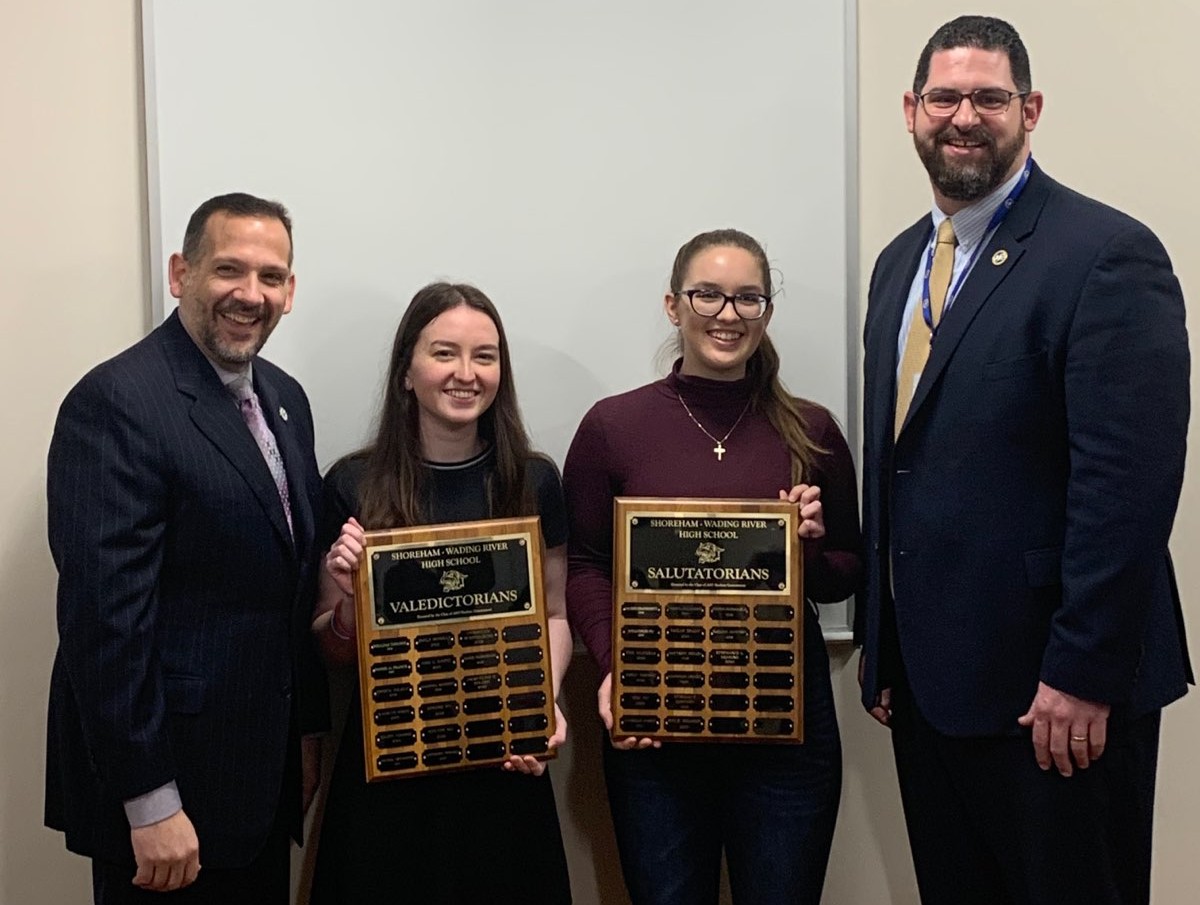 SWR announced senior Jacqueline Holden as the Class of 2020 valedictorian and Stephanie Searing as the class salutatorian at a surprise celebration with their parents in the main office conference room in early March. Both students not only earned the highest GPAs in the senior class but were also involved in numerous clubs and extracurricular activities.

Jacqueline Holden, with a GPA of 102.81, will attend the University of Pittsburgh in the fall as a molecular biology major in the honors college program. She is considering minoring in Spanish.

“It’s very nice to be awarded valedictorian,” Holden said. “I have worked hard throughout high school and it is great to have that level of recognition.”

Holden has taken a total of 10 AP classes and four honors classes. She has been awarded excellence in Biology Honors, Algebra II, and AP Chemistry. She also earned a National Merit Scholarship Letter of Commendation and the President’s Volunteer Service Award through Girl Scouts.

In addition to academics, Holden was involved in many clubs and activities. She was treasurer of the drama club, acting in seven plays and part of the tech crew in five. She was varsity captain of Brainstormers, secretary of Students Against Destructive Decisions,  secretary of WISE, and a member of Act Now, a suicide prevention group.

“Jackie is a rare mixture of brilliance, talent, and kindness. I’m thrilled she is the valedictorian for the class of 2020. Not to mention how fun playing Brainstormers with her is,” Mrs. Gianfalla said.

She also is involved in many community service activities. She volunteers at St. Mark’s Church as the leader of the teen choir as well as at the Vacation School Bible Program. She is a chemistry tutor through the National Honor Society and is also a Girl Scout.

“I am currently pursuing my Gold Award through Girl Scouts to build an outdoor classroom at the high school,” she said.

Holden said that staying organized is important. “I like to keep organized so I can schedule time for homework and studying, as well as time for extracurriculars and work, and of course free time with friends and family,” she said.

Although Holden said she has made many great memories at SWR, her favorite was Mamma Mia, the high school’s fall musical in 2019.

“I am very proud of the effort the company put in and how successful we were,” she said.

“I would like to think I taught Jackie, but she entered my class the same way she will leave it: as a leader, as an intellect, and as a friend to many. Jackie, I wish you the best of luck, though I know you won’t need it,” Mr. Storck said.

Holden encouraged underclassmen to get involved.

“Get involved in high school as much as you can,” she said. “Find a club, sport, or activity that you love and do it. As important as school is, by being involved in extracurriculars you will make new friends, form lasting memories, and have more accomplishments than you ever could.”

Stephanie Searing, with a GPA of 102.05, will attend Stevens Institute of Technology in New Jersey in the fall as a biomedical engineering major, possibly minoring in music and technology.

“I feel really proud of myself because I know how hard I worked throughout high school, and it feels amazing to know that I have something to show for it,” Searing said.

In addition to academics, Searing is a member of Mathletes, chamber orchestra, pit orchestra, and Best Buddies. She is also on the track and tennis teams.

“Stephanie’s exceptional aptitude and intrinsic motivation have been apparent throughout her honors math classes,” she said. “Her achievements stem from her intellectual curiosity, advanced ability and her determination to master even the highest level content.”

Maintaining a high GPA when involved in many activities takes effort. “I put in a lot of work, like studying, taking neat notes, and always asking for help whenever I need it,” she said.

Mr. Storck, Searing’s AP Capstone teacher, spoke to her academic achievements. “Steph is an incredible scholar and her future burns so bright. She is brilliant, selfless, and passionate. I cannot wait to see the amazing things she brings to this world.”

Searing said that high school prepared her for her future in many ways. “High school has prepared me both academically and socially. Through taking AP courses, I have learned a lot about time management, work ethic and course load. I have also learned a lot about how to make friends and just friendship in general.”

Her favorite memory of SWR was doing labs in AP Physics. “It’s such a small class and we all had a lot of fun together,” she said.

To underclassmen, Searing advises the importance of mental health.