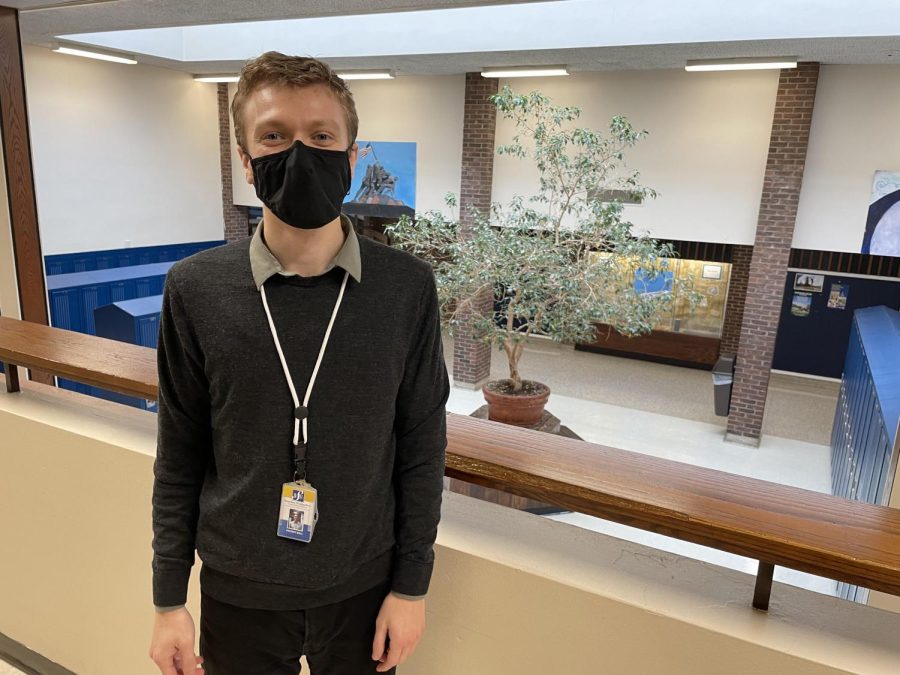 Mr. Ball on the A-Wing balcony.

Mr. Vincent Ball is a man of many talents here at SWR, teaching three English classes in the morning, covering absent teachers in the afternoon, and running the new Media Club with Mr. Brendan Gilley after school on Thursdays.

He attended Stony Brook University as a Journalism major, and decided that he would like to teach after one particular experience in college.

“I was a teacher’s assistant for one of the upper division Journalism courses, which wasn’t like a lot of teacher’s assistants where you have a background role in a class of 300+ people grading scantrons or the like,” said Ball. “This was 20 students, very hands-on. The professor and I helped students work through and edit their stories.”

Mr. Ball greatly enjoyed his time in the class helping the students, and soon went into teaching. In an interview, he talked about what he loves about teaching and laughed about how he decided on teaching high school.

“That was the main thing for me—the writing and the teaching of writing. I knew that I didn’t have it in me to go to school for so long to be a professor, so I figured all right, I’ll teach high school,” said Ball.

After getting his master’s degree, Mr. Ball taught at a school in Bohemia before landing a job at SWR. Like Mr. Gilley, he enjoys the maturity of the student body.

“I knew that this was a very academically motivated school, which was a big deal for me,” said Ball. “I wanted to work somewhere where I could really focus on teaching the students, and less on classroom management and behavioral stuff.”

The Media Club, newly created this school year, is a club where students are given the chance to create media of their choosing. Whether it’s mockumentaries, music, podcasts, or other creative projects, Mr. Ball seeks to support the members in their endeavors.

“The Media Club is…a fantastic space here at the school that we’re hoping to really utilize and allow students an opportunity to discover something about the world around them and themselves,” said Ball.