On December 8th, 2020, an interview of the former director of space programs for the Israeli Ministry of Defense, Haim Eshed, was published in The Jerusalem Post. In his interview, he unexpectedly claimed the existence of a “galactic federation” composed of various alien life forms that the now-former President Trump of the United States is aware of, as well as a secret underground base located on Mars.

According to Eshed, the extraterrestrial members of this “galactic federation” have requested that they remain a secret until humanity is ready to accept their existence in order to prevent a mass hysteria.

While this information may appear groundbreaking, this is not the first time a qualified government official has alleged the existence of aliens to the public. Paul Hellyer, the 97-year-old former Minister of Defense of Canada and longest serving current member of the Privy Council of Canada, has long insisted on the authenticity of alien life, even testifying before six U.S. Representatives about their legitimacy. He has claimed that four different alien species have been visiting Earth for thousands of years and as many as 80 different species exist. According to Hellyer, advanced inventions such as microchips and Kevlar vests are the making of alien species and humans have simply adopted this technology.

Hellyer has purported the existence of a particular alien race known as “Nordic aliens” who are described as appearing almost 100% human, except they are all blond, blue eyed, Caucasian looking, about six to seven feet tall, beautiful and physically flawless. This hypothetical alien race has been reported by different alien abductees and witnesses.

I created a survey and recommended it to all my friends and shared it with others who live in Shoreham or Wading River. I received 51 responses from a pool of students, high school staff members, teachers, alumni and SWR residents.

When asked if they believed that extraterrestrials will be discovered and become of public knowledge in their lifetime, the options ‘yes’ and ‘maybe’ both had a response of 37.3% of people. 25.5% selected ‘no.’

When asked if they believed that the government of the United States or another country may know more about extraterrestrial life than they are letting on, 72.5% of surveyees said ‘yes,’ 19.6% answered ‘maybe’ and 7.8% replied with ‘no.’

When asked if they believed aliens may secretly have control over the state of world affairs, a stark majority of 76.5% replied ‘no’, 15.7% said ‘maybe’ and only 7.8% said ‘yes.’

66.7% participants replied ‘yes’ when asked if they believed in the existence of ghosts, poltergeists, apparitions or doppelgangers, while eleven replied 21.6% and 11.8% replied ‘no.’

The most popular mythical creatures that surveyees claimed they believed existed were sea monsters, witches and wizards, although most said they believed in none. 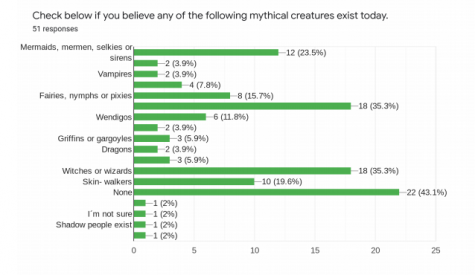 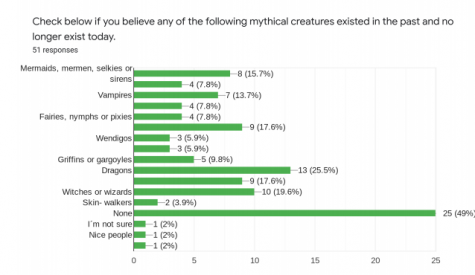 The most popular cryptids that surveyees they believed existed were Bigfoot and the Loch Ness monster, although most said they believed in none. 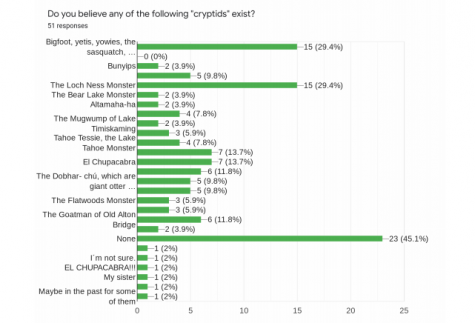 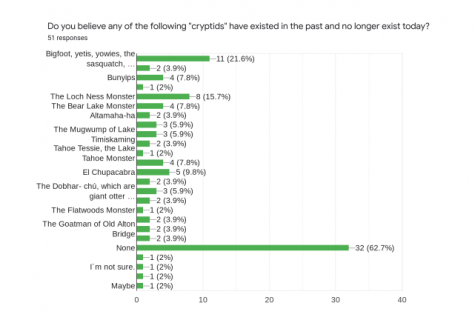 Anyone can scoff at the prospect of ghosts or mythical creatures. However, it’s hard to argue that there is no possibility of extraterrestrial life. The Milky Way is roughly 1,000,000,000,000,000,000 kilometers in diameter and a tiny speck compared to the rest of the universe. Is it pragmatic to claim that humans are the sole remarkable intelligent life form in existence?