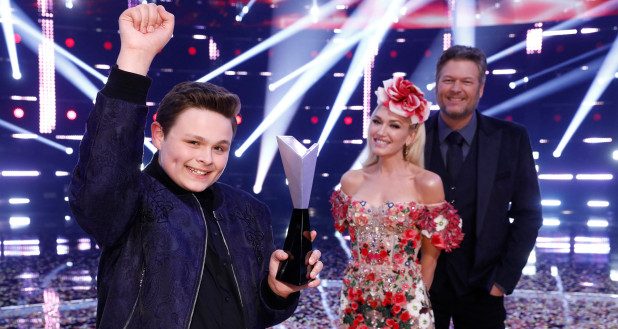 On the 19th season of The Voice, viewers listened to the melodious singing of Shoreham-Wading River’s very own Carter Rubin.

Rubin’s path started in Boston in early 2020 before the pandemic had occurred. He then flew to Los Angeles, California at the beginning of July. For his first aired performance, Rubin sang “Before You Go” by Lewis Capaldi, a song that holds significant meaning. Rubin explains, “For me, it’s about not missing the chance to be there for someone and that someone in my life is my brother who was diagnosed with autism.”

After singing his blind audition, two of The Voice judges, John Legend and Gwen Stefani, tried to persuade Rubin to join their teams. In the end, Rubin picked Team Gwen and when asked about his choice, he said, “it was definitely a tough decision. I chose Gwen Stefani as a judge because… I’m really inspired by her, she’s definitely a performer.” Rubin emphasized how “she likes to work with her contestants on their style and how they dress, how they present themselves, and their stage presence.” He went on to say that “all four of them are so sweet and so incredibly genuine…they are just down to earth, really helpful [and] really encouraging so it was definitely a really amazing experience to meet them, especially Gwen.”

Rubin attributes his lifelong interest in music to his family, saying, “I could not have done this without my family, they are my biggest supporters and they’re definitely always rooting for me and encouraging all of my dreams.” As previously mentioned, Rubin had even chosen his blind audition song to convey a special message to his brother, Jack. He further explained, “I always want to be there for him and just remind him it’s okay to let your walls down and let other people in and help you.” Crediting the SWR music community he says, “[They’ve] definitely helped me open up with my stage presence and be confident because I’ve had really good choir directors like Mr. Gross in middle school and Mr. Creighton in high school. I’ve also been part of musical productions and plays and I think that’s a really good way to make new friends and friendships and express yourself to this day.”

Carter also appreciates and is grateful for the immense support from the SWR community. Explaining the impact the SWR community as a whole has had on his music path, he says, “just a huge thank you. I am proud to be a part of the SWR community. You guys have been so incredibly supportive; I couldn’t have asked for more. I’m really grateful and thankful to be a part of this really awesome community, and just thank you! I feel like I couldn’t have done this without everyone’s support and it was definitely a hard secret to keep for a while. But after a while, I released the secret everyone was just so incredibly supportive of me.”

Editor’s Note: This interview was conducted during Carter Rubin’s journey on The Voice, since then he has gone on to win the 19th season of the Voice, being the youngest male singer to do so.

The following are highlights from the rest of Carter’s The Voice journey:

Along with fellow contestant Larriah Jackson, Carter sang “Like I’m Gonna Lose You” by Meghan Trainor for the Battle round, a truly dulcet duet that had judges struggling to choose.

For the Knockouts, Carter gave an impressive and expressive performance of “You Say” by Lauren Daigle that almost brought Kelly Clarkson to tears.

In the Semifinals, Carter’s smooth voice produced an enchanting and captivating rendition of “Rainbow Connection” from The Muppet Movie.

The Finale included Carter singing his uplifting original song, “Up From Here” as well as an incredibly festive duet of “You Make It Feel Like Christmas” with his coach, Gwen Stefani.